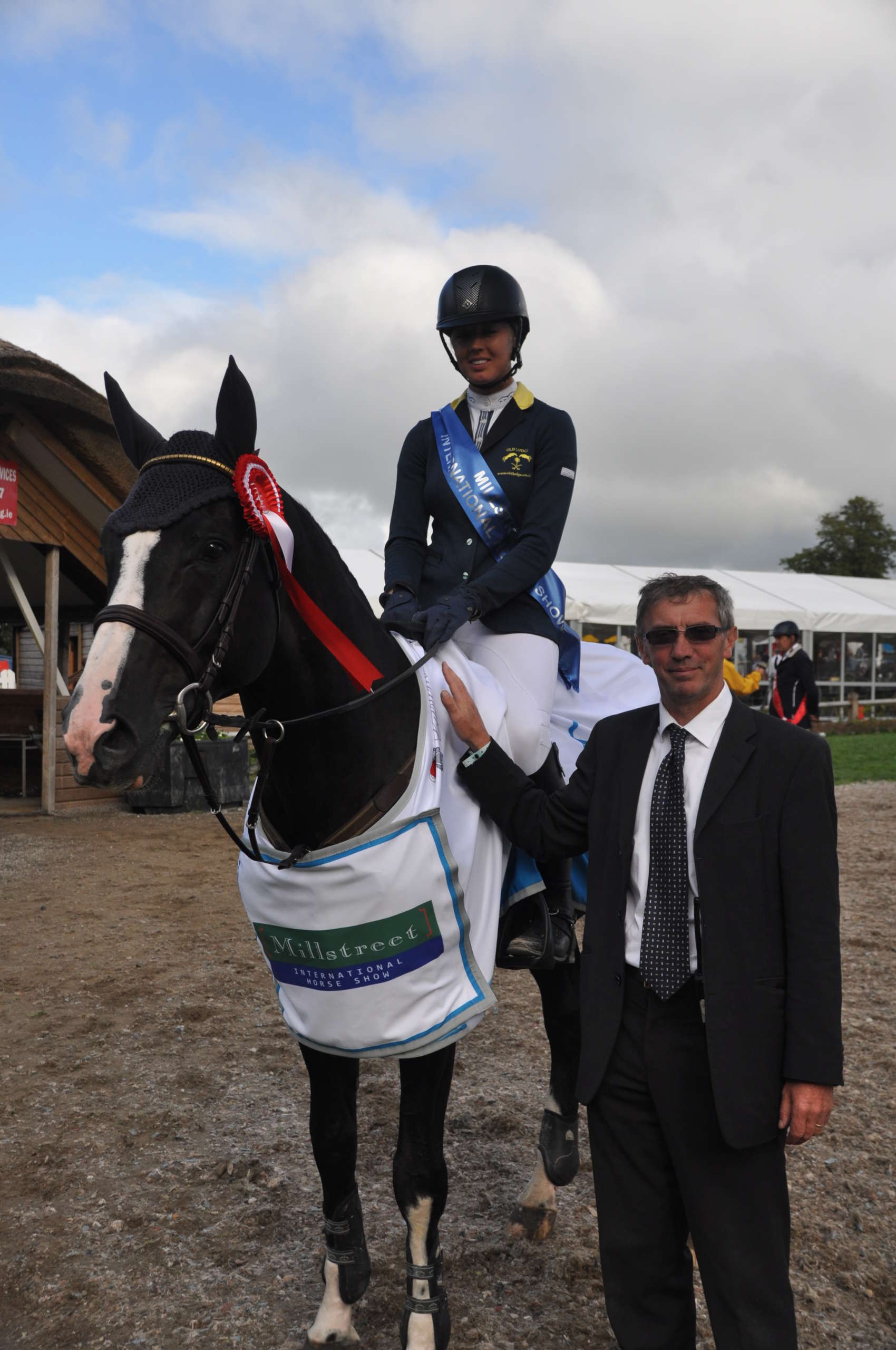 Great Britain’s Ellen Whitaker rode a superb second round to take the Hyatt Hotels Millstreet International Grand Prix in Co. Cork this afternoon. Having incurred four penalties in the first round, Ellen jumped the only clear in the deciding round with Old Lodge’s KWPN “Zanzibar V” to take the €16,500 winners cheque back to Yorkshire. Captain Michael Kelly had to settle for second place; adding four penalties to his clear first round with the Minister for Defence’s Irish Sport Horse “Ringwood Glen.” The Grand Prix also formed the final of the Connolly’s RED MILLS GBI Tour. Having included competitions at Chepstow (Wales), Mullingar, The Royal Highland Show (Scotland) and the British Masters (Southview, England), the Leading Rider Prize was awarded to Great Britain’s Steven Whitaker and “Locarno 62,” who slotted into 6th position but picked up vital points to add to their success at the Royal Highland Show earlier this year.

On Saturday, Wexford’s Bertram Allen took the top position in the feature class. Riding Billy Twomey’s “Romanov,” the Individual Silver Junior European Medallist’s faultless performance in the Connolly’s RED MILLS Millstreet Masters earned him a second win of the week. Finishing just eight hundreths of a second behind was Great Britain’s William Whitaker with “Upperclass” while current RED MILLS GBI Tour leader Steven Whitaker and “City Banking 3” completed the line-up. Later in the day, the Green Glens Arena echoed with the sounds of “Amhrán na bhFiann” once again; this time in honour of the Irish Field Speed Derby winner Joan Green who rode Ciaran Cronin’s “Abbey Colleen” to victory. Jessica Burke took second spot in a hotly contested competition that resulted in only two clear rounds from the forty two that started.

A number of new initiatives were introduced to the show this year, including the successful running of the inaugural Two Year Old Futurity class. For the first time, the main classes from the show were streamed live on the internet, attracting over 1,000 viewers from over 9 countries. Speaking at the conclusion of the show, Event Director Thomas Duggan declared the week’s proceedings to be a resounding success. “Having returned to International competition last year, we have continued to look forward and develop the show. The standard of competition we have seen this week proves that Millstreet is becoming an unmissable event for International riders and we are already making plans for 2014!”