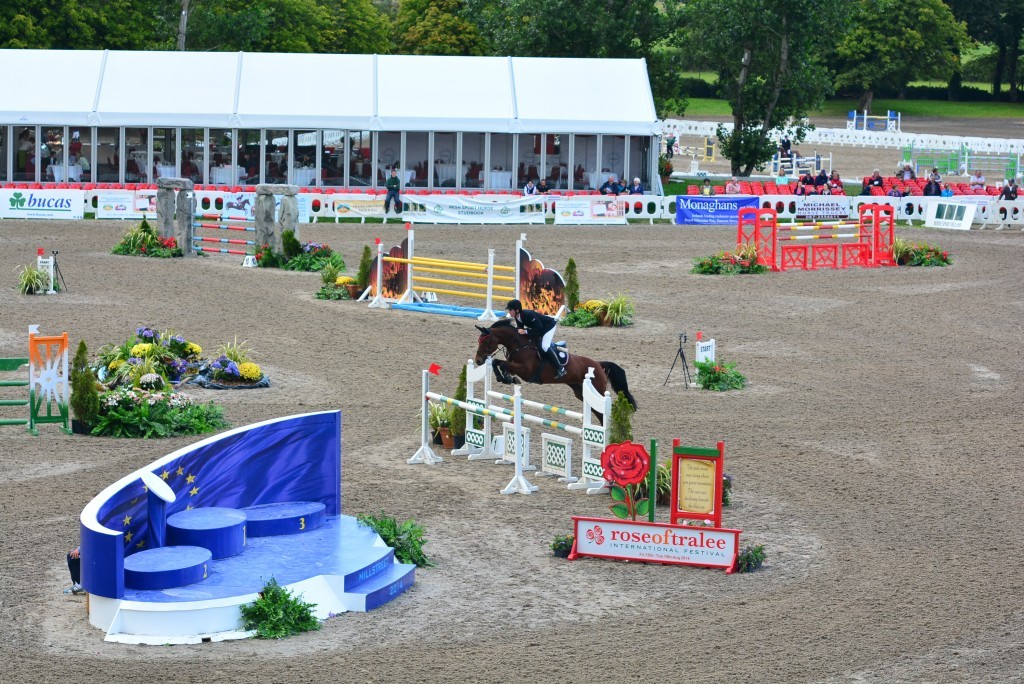 On a day where riders and spectators endured a series of heavy rain showers Renwick proceeded to light up the Green Glens Arena with her performance in the Slaney Foods International 2 Phase class. Riding for John and Marian Renwick, the Essex rider steered Beluga to victory to post the first British win of the week, just in front of Ireland’s Richard Howley with Jennifer Ireland’s Hazel.

The Green Glens Arena has been a hive of activity this week, with over 8,000 entries received across 109 competitions. Competition got underway with a series of National and young horse classes on Tuesday and Wednesday. The National Eventing Discovery on Tuesday featured many of the fences that formed a part of the Cross Country course at the recent FEI European Championships for Ponies. These posed no problem for Bandon rider Allan McSweeney with his stalwart Rock a Bye Balladeer in the Six Year Old section. Visiting judge Rowland Fernyhough was joined by Kate Jarvey to assess the suitability of the horses entered in the 4 and 5 year old sections with the Five Year Old class going the way of Jason Higgins and the Michael Meade owned Shannondale Julia. In the Four Year Old section, Christopher Hunt took home the ribbons with Patrick Meagher’s Royal Luxor.

Fresh from a busy week at the Discover Ireland Dublin Horse Show, Billy Twomey made a welcome return to Millstreet and took pole position in Wednesday’s Dennany Reidy and Associates Boomerang Qualifier by jumping a superb clear with Codarco. The seven year old stallion is a former National Discovery champion and was brought up the ranks by Thomas O’ Brien. Earlier in the day, Ger O’ Neill recorded his first victory of the week with Sharon Fitzpatrick’s Ard Ginger Pop in the first Millstreet Ruby Qualifier for 5 year olds. Daniel Coyle took the honours in the second qualifier with Conor Coyle’s Harakiri Z.

The action continues at Millstreet until Sunday with plenty of top class International and National competitions still to come. Of the 8 International classes (including three Longines World Ranking classes), the €50,000 Millstreet International Grand Prix is the main highlight, taking place on Sunday 17th August.

This evening’s Irish Farmer’s Journal Young Irelander Final looks set to be one of the strongest showcases of three year old horses in recent years while Saturday’s Irish Field sponsored National Discovery Final will also provide a fascinating insight into the International showjumping horses of the future. In another innovation for Millstreet International Horse Show, 2014 sees the introduction of an Elite Foal Sale which will be held on Saturday evening. The aim of the sale is to create a platform for Irish breeders to showcase their stock and to present buyers with the unique opportunity to buy a high class foal. The foals, which were pre-selected for the sale, are each from a proven show jumping performance family, including links to MHS Going Global, Electric Cruise, TKS Timeline, Diamond Exchange, Kilcoltrim, Castlepollard and Dorada. The foals will be paraded before the National Discovery class in the Main Indoor Arena with the sale following later that evening.

Speaking at the Rider’s Welcome Reception, event director Thomas Duggan extended a warm welcome to all the riders that have travelled to Millstreet, particularly those who had travelled from abroad. “Millstreet International Horse Show comes on the back of a highly successful FEI European Championships for Ponies where our younger riders truly excelled. I’m looking forward to more great competition this weekend.”

Action from the main classes is being streamed live on www.millstreethorseshow.ie where regular updates and live scoring can also be found. If you’re looking for a family day out with free admission, world-class showjumping, a wide range of trade exhibitors (including saddlery, leisurewear and footwear, pet accessories and more) then look no further than the Millstreet International Horse Show 2014!