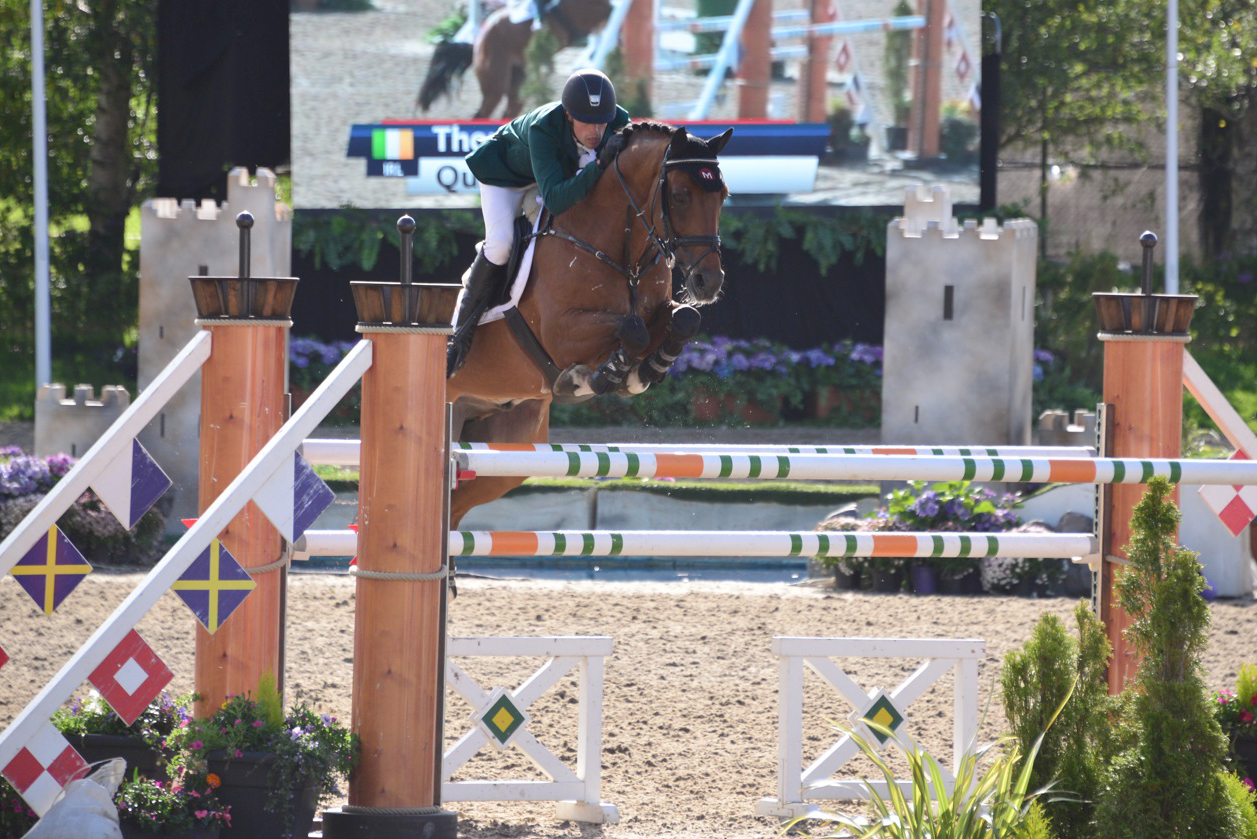 Riding Simone Aschwanden’s ten year old stallion Quite Zero, the Thurles-born twenty nine year old was making his return to Millstreet after a gap of 12 years and knew that he had to be clear to take the title. ‘He’s an extremely careful horse and this is only his second Grand Prix” commented Ryan who is based in Switzerland. “The faster he goes, the better he jumps!” One of only eight riders to jump clear in the first round, Thomas went on to finish three seconds ahead of last year’s champion, Great Britain’s Ellen Whitaker, who picked up a single time fault in the jump-off after a faultless first round performance with Le Beau. Holly Gillott heads back to Leicestershire with a share of the €50,000 prize fund after finishing in third position with Dougie Douglas, an Irish Sport horse she co-owns with Graham Smith.
The Green Glens Arena has been a hive of activity all week, with over 8,000 entries received across 109 competitions and a record 1,200 horses stabled on site. Earlier today, Ger O’ Neill continued his winning form by taking the Millstreet Ruby Final title with Sharon Fitzpatrick’s Ard Ginger Pop. With Sharon’s daughter Susan currently taking some time off after her bronze medal winning performance at the recent FEI European Championships for Ponies, O’ Neill was offered the ride on the five year old Luidam mare who he describes as “brave and intelligent”. Meanwhile, Cork man Billy Twomey took pole position in the Boomerang Final by jumping a superb double clear with Codarco. The seven year old stallion is a former National Discovery champion and was brought up the ranks by Thomas O’ Brien. Twomey finished just ahead of British rider Laura Renwick and her OBOS Quality mare Washingtonn IX.
Earlier in the week, the Irish Farmer’s Journal Young Irelander Final provided a display of some of the finest three year old horses seen by the judges in recent years. Michael Florence, Tony Newbury and Rowland Farneyhough called back three horses to re-perform as they were tied for the lead. In the end, they decided that Yana Verling’s Ars Vivendi mare Larav Vendi should take the title – an announcement that was greeted with tumultous applause by the 3,000 strong audience. The following evening’s Irish Field National Discovery Final was equally popular with visitors to Millstreet and a full house witnessed Linda Courtney reclaim the title with her four year old Indoctro gelding LCC Empty Pockets. In a new initiative for 2014, an Elite Foal sale was held on Saturday evening with ten pre-selected foals parading before the National Discovery class and being put up for auction afterwards. The sale attracted a lot of interest with €15,000 exchanging hands for the top lot on the night, an OBOS Quality colt with links to MHS Going Global.
Speaking at the conclusion of six days of competition, event director Thomas Duggan declared the week’s proceedings to be a resounding success. “We saw some great up and coming talent from across Europe at last week’s FEI European Championships for Ponies and it has been very promising to see so many of our young Irish riders coming to the fore this week. A lot of our International visitors are making Millstreet an integral part of their competition schedule and we are already starting to plan for our 2015 show.”