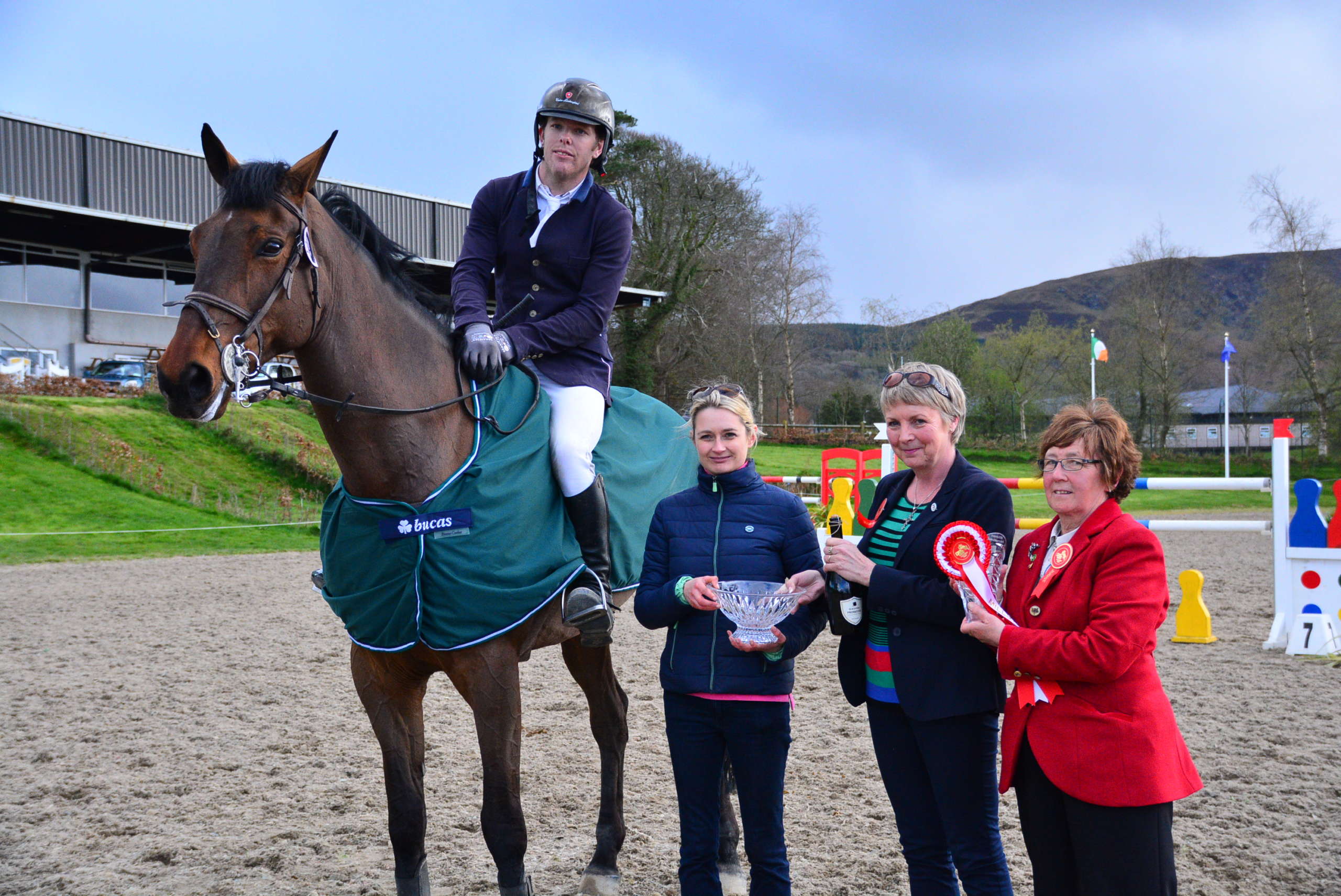 Tipperary man Liam O’ Meara brought another successful Millstreet International Welcome Tour to a close by calmly taking the CSI* Welcome Tour Grand Prix title on Saturday after a thrilling competition. Twenty eight horses came forward for the feature class, all vying for their share of the €5,500 prize fund and the first round claimed its fair share of victims. Thirteen combinations produced faultless performances over the Olaf Herrmann (GER) designed course to go forward to the second round – leading to one of the most exciting Grand Prix to grace the Green Glens Arena in recent years.

With the lead changing three times, Dublin man Daryl Walker (Cushions) thought he had done enough to take the title after ten horses, knocking over a second off the time of leading International event rider Michael Ryan (Ballylynch Wizard). However, the second last competitor into the arena changed everything and when Liam O’ Meara entered with Mr. Coolcaum (ISH) (Coolcaum Hill) the gathering crowd realised that things were about to change again. O’ Meara navigated a course that no-body had thought was possible, making an even tighter left handed line from an imposing vertical to the penultimate oxer to break the finish beam at 40.46 seconds. Galway-based Jessica Burke (Vitesse) gave it her best but an unlucky pole on the floor ensured that victory went to O’ Meara, the current leader of the HSI, Connolly’s RED Mills Spring Tour. ‘Having broken him ourselves as a three year old, Coolcaum’s talent is continuing to develop,’ said O’ Meara.

It was a tough track and a very quick jump-off which will have helped us both as we get ready for the Premier Series.

After a busy first weekend of competition, the Welcome Tour resumed with a series of national competitions on Wednesday. An important element of the Welcome Tour is the rotation of arenas and course designers. Germany’s Olaf Herrmann worked with James Tarrant in the International Arena once again while Jason Abbs travelled from Great Britain to collaborate with the team of national course designers. A strong field of 67 combinations passed the Horse Inspection for the CSI* classes which got underway on Thursday. In the opening 1.25m Speed class, it looked like 2014 Pony European medallist Susan Fitzpatrick would be gracing the winner’s position with Isacorada, having held the lead for much of the class with a time of 59.14. However fellow Kilkenny contender Ger O’ Neill produced a solid performance with Patrick Cantwell’s Garrison Lux to take the honours, knocking 7 hundredths of a second off the leading time. In the 1.35m Two Phase class which followed, victory went the way of Thomas O’ Brien with Niamh Keogh’s Ullrich. The Galway man had crossed the River Shannon with a large string of younger horses, looking to gain experience over the 10 days of the Welcome Tour. Liam O’ Meara took second position in this Grand Prix Qualifier with his own Mr. Coolcaum while Anna Carway completed the line-up with Ajaccio.

Carway, a recent HSI, Connolly’s Red Mills Spring Tour winner went one step better in the following day’s 1.30m Table C Class, settling for 2nd with her own Winner. The class was a hotly contested affair, with many in the field setting their sights on qualification for the €20,000 Mullingar Bet Showjumping Live class. After coming close on numerous occasions, Seamus Hayes recorded his first CSI* win of the show with his own Twister while Ger O’ Neill featured again to occupy third position, this time with his mare Gloria. Amongst those taking qualifying places for the new competition were former Hitchmough Bursary (Billy Twomey) recipients Daragh Hopkins and Roisin Fagan together with Jessica Burke and Olive Clarke.

The 1.25m Mini Grand Prix proved to be a tough class in which to predict the winner. With 19 combinations making it through to the second round, a close-fought contest emerged for the top places with Sven Hadley and Quanbell returning to their winning ways, just ahead of Robert Harrison with Knockbaun Douggie. Australian rider Jake Hunter who is currently based with Sandra and Vinnie Duffy took third position with Cruising for Chics.

Heavy overnight rain on Friday cleared to allow the young horse class finals take place in between the odd April shower. The qualifying places on offer for August’s Millstreet Ruby (5YO) and Boomerang (6/7YO) Finals had resulted in strong classes throughout the week. The early start didn’t bother Madeline Roberts Allen with Brookpark Vito (ARS Vivendi) who completed just ahead of Ger O’ Neill with Sharon Fitzpatrick’s Keatingstown Zwellie One. In the 6/7 year old class, O’ Neill put in another strong performance with Jim O’ Neill’s Castlefield Gucci but it wasn’t enough to beat Jake Hunter who took the honours with Sandra Duffy’s Kenco. In the 1.25m Two Phase class, Sven Hadley notched up his 2nd CSI* win of the week with Quanbell, finishing just ahead of Ger O’ Neill (Garrison Lux) and Liam O’ Meara (Realt na Carrig). In the national arenas, Peter Moloney earned himself another Millstreet CSI*** qualifying slot with Ann Foran’s Ballyconnery Wood in the 1.20m – 1.25m Final having taken the equivalent position with Deirdre Bourn’s Valtaire in the preceding 1.10m – 1.15m Final.

The Welcome Tour is now in its third year and is continuing to develop. For the first time, entries passed the 5,000 mark and the new additions and initiatives were warmly received. Outside of the competition arenas, an audience of over 500 ‘Rocked for Ott’ on Wednesday night with legendary musician (and fellow showjumper/eventer!) Liam O’ Connor and special guests raising funds for the Alex Ott Appeal. Amongst the visitors to the Green Glens Arena during the week were Michael Blake and Capt. John Ledingham, following the progress of this year’s team contenders for Juniors, Young Riders and Children on Horses. With Millstreet hosting the FEI European Championships in 2016, the Welcome Tour provided the ideal platform for competitors to put their training to the test.

Speaking at the conclusion of the 2015 Millstreet International Welcome Tour, director Thomas Duggan praised all those who had played a part.

The 20% increase in entries this year clearly demonstrates the demand for the flexible format of the Welcome Tour.

The decision to introduce CSI* classes on both weekends has been well received as has the addition of Combined Training and Eventing Ireland classes. The attention in Millstreet now turns to the upcoming CSI*** show in August, followed ten days later by the inaugural Millstreet/Drishane Castle International Horse Trials.

Results from all classes available here.