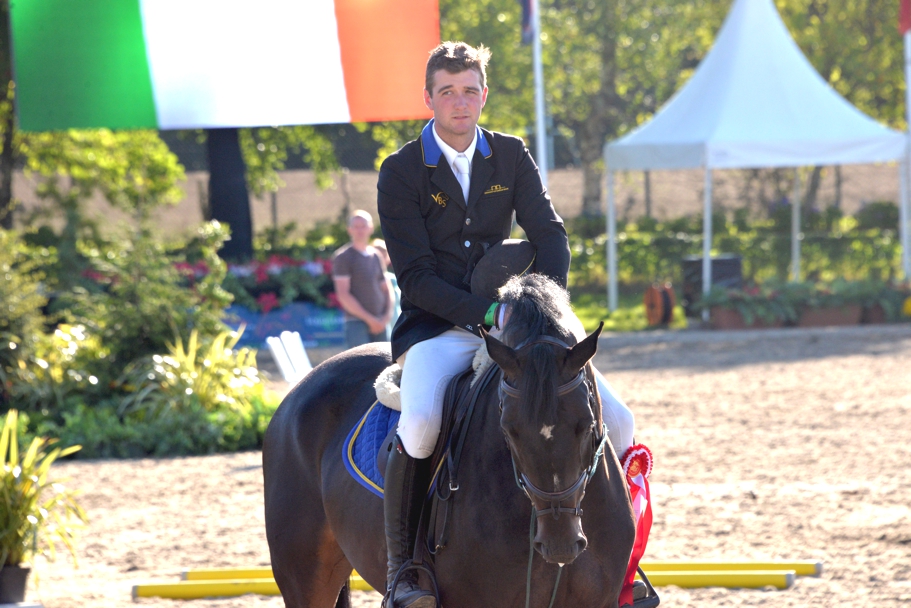 Great Britain’s Joe Whitaker claimed victory in the opening International competition of the 2015 Millstreet International Horse Show today (Thursday). Riding Steven Whitaker & Mrs Dawn Makin’s Lola V, the South Yorkshire based rider steered the ten year old Locarno 62 bred gelding to victory in the hotly contested qualifer for Sunday’s Millstreet International Grand Prix. Course designer Mark McGowan is a Millstreet regular at this stage and used the opening class to allow riders an opportunity to explore the arena while still being challenged by a technical track. ‘This is my third trip to Millstreet and I would love to come home with the Grand Prix title,’ said Whitaker speaking after his win this afternoon. ‘Lola V won the 1.50m Grand Prix at Yorkshire Show a few weeks ago and he feels great so I’m pretty hopeful!’ For the second year running, Ireland’s Alexander Butler had to settle for the runner-up position with Caroline Byrne’s Irish Sport Horse gelding Halloway Cruise while Damien Patrick Griffin took third with Pamela Donaghy’s Tabby.

The second international class of the day, the Cavalor 1.35m Two Phase saw the Tricolour raised over the Green Glens Arena for the first time this week when Kilkenny man Vincent Byrne recorded the fastest clear in the second phase with James Weldon’s Mr. Rockefeller. Byrne prevented Joe Whitaker from notching up a second win, with the British rider settling for second with Ronnoco Jump Ltd.’s Lareeco. Byrne has had the ride on the Ard VDL Douglas eleven year old gelding since he was a five year old and took the honours in last year’s Irish Field Speed Derby at Millstreet. Mr Rockefeller was also the leading horse in the National Grand Prix League last year. Speaking after his win this afternoon, Byrne said,

He’s always been a good winner for me. He can go fast when he needs to and he always tries to be careful.

The 2015 Millstreet International Horse Show got underway on Tuesday under clear blue skies and summer sunshine and record crowds have been enjoying the first two days of showjumping action. Described by many as Ireland’s most complete equestrian event, the show continues to develop since it’s establishment by Noel C. Duggan over 42 years ago. The 2015 edition has attracted over 6,000 entries with a record 1,300 horses stabled on site. With a schedule featuring over 100 different classes, the entry list is a veritable who’s who of Irish equestrianism from 128cms pony riders right up to CSI*** International riders and everything in between.

Of the 8 International classes (including three Longines Ranking classes), the €50,000 Millstreet International Grand Prix is the main highlight, taking place on Sunday 16th August. A strong field of riders from around the world have travelled to Millstreet this week, with ten nations represented on the final entry list, including 4 riders rated in the top 140 in the Longines Jumping Rankings (June 2015). The home team includes two members of the victorious Aga Khan Nation’s Cup team who brought the RDS alive last week. Greg Broderick and Cian O’ Connor will be temporarily putting their team alliance aside as they each battle it out for their share of the €200,000 prize fund on offer. Joining them at Millstreet are many of Ireland’s top performing show-jumpers including Cameron Hanley, Billy Twomey, Richard Howley, Dermott Lennon and Clem McMahon. Millstreet 2014 Grand Prix champion Thomas Ryan has come back to the Green Glens Arena hoping to defend his title. He faces opposition from a strong contingent of visiting riders from nations including Australia, Canada, Denmark, Great Britain and the USA. Also making a transition from their usual games, National Hunt jockey Paul Carberry and International Event rider Elizabeth Power will be hoping to make their mark in Millstreet this week.

With the inaugural Millstreet / Drishane Castle International Horse Trials now just two weeks away, Tuesday’s opening National Eventing Discovery classes allowed spectators a flavour of what they can expect from 28th – 30th August. Victory in the 6YO and Over section sponsored by Ezy Sport Horses went the way of Wexford based event rider Michelle Kenny and Eurelia A who recorded the fastest time in a competition that failed to produce any clear rounds. In the Young Event Horse classes, the prize money will once again be making it’s way to the Model County with Adrian Burrell taking the honours in the four and five year old sections riding Mr JW Flory’s Grovine Class Act and Denny Kerr’s Fame or Fortune respectively.

Aside from the International action, entries have been strong across the young horse classes at Millstreet with the Millstreet Ruby (5 Year Olds) and Boomerang classes (6/7 Year Olds) each attracting well in excess of 100 entries. Wednesday’s Ruby Qualifier was won by Gerard Clarke and Fabio M while Jordan Coyle finished at the top of the leaderboard in this morning’s second qualifier with Kbs July Johnson. The opening Boomerang Qualifier went the way of British raider Laura Renwick with MHS Washington with riders having a final chance to qualify on Friday morning. The opening 1.20m Mare’s Classic qualifier also provided some intense competition with Mark Murphy taking the honours aboard Tom MacGuiness’ Horseware Foxy. The winner of Sunday’s 1.20m Mare’s Championship will receive a semen straw for “Kannan;” the legendary Dutch warmblood stallion that carries blood from some of the most influential show jumpers in Europe; Voltaire, Furioso, Nimmerdor, Gotthard, Farn and Le Mexico.

Millstreet’s commitment to supporting the Irish equestrian industry continues, with a strong entry received for young horse classes including the Boomerang, National Discovery, Young Irelander and Millstreet Ruby. Many of the best equestrian producers in the country are represented in the Irish Farmer’s Journal Young Irelander Final for three year old horses. Qualifiers were held at Millstreet, Mullingar, Ballina, Clare and the West Cork Breeders Show. Those qualified will now compete this evening (Thursday), with twenty going through to Friday night’s prestigious final. Former Olympic Showjumper Roland Ferneyhough will be on hand along with Tony Newbery, Mike Florence and Joseph Murphy to judge the winners of all the special classes.

Competition in Millstreet continues until Sunday evening. If you’re looking for a family day out with free admission, world-class showjumping, a wide range of trade exhibitors (including saddlery, leisurewear and footwear, pet accessories and more) then look no further than the Millstreet International Horse Show 2015!