Cameron back in Podium Position at Millstreet 2015 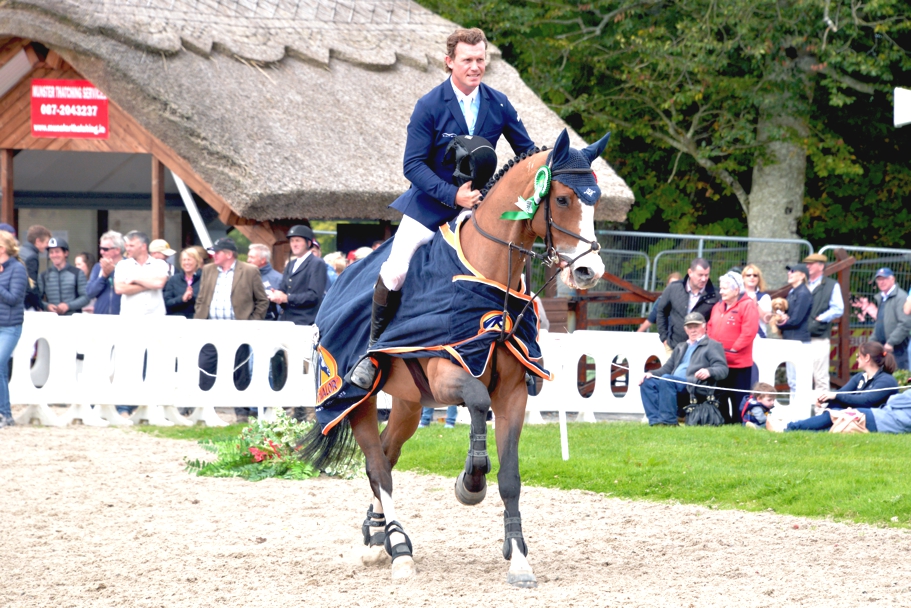 Millstreet has always been a lucky place for me. I’m looking forward to Sunday but I’ll take things one day at a time.

Last into the arena, Derry’s Daniel Coyle looked set to overtake Hanley with John Carr’s Zuidam but a wide turn to the second last proved expensive. Spanish visitor Antonio Marinas Soto had to settle for third place with Cash and Go.

Seventy two starters came forward for the second International class of the afternoon, the Irish Farmer’s Journal 1.40m Table C class. Here, Great Britain’s Laura Renwick took the honours for the second year running with John & Marion Renwick’s fourteen year old Heartbreaker mare, Beluga. A fence down added four seconds to her time but it was enough to go into the lead at the halfway stage in the class. Speaking after her win, Renwick said

Beluga a very fast horse and these classes are her bread and butter. She’s normally very careful but even with the one fence down you can see how naturally a fast horse she is!’

Waterford’s Francis Connors went to the top of the leaderboard in the early stages of the class with Hilda Anthony’s traditional Irish Sport Horse mare Uskerty Diamond Lady while Corkman Billy Twomey took his share of the spoils in third place with Tin Tin, a horse he co-owns with Sarah Hancock.

Tonight, the attention turns to the Main Indoor Arena where many of the best equestrian producers in the country are represented in the Irish Farmer’s Journal Young Irelander Final for three year old horses. Qualifiers were held at Millstreet, Mullingar, Ballina, Clare and the West Cork Breeders Show. Following the qualifier held on Thursday night, twenty four horses have been selected to go forward to tonight’s Final. Former Olympic Showjumper Roland Ferneyhough will be on hand along with Tony Newbery, Mike Florence and Joseph Murphy to judge the winners of all the special classes.

The 2015 Millstreet International Horse Show got underway on Tuesday under clear blue skies and summer sunshine and record crowds have been enjoying the first three days of showjumping action. Described by many as Ireland’s most complete equestrian event, the show continues to develop since it’s establishment by Noel C. Duggan over 42 years ago. The 2015 edition has attracted over 6,000 entries with a record 1,300 horses stabled on site. With a schedule featuring over 100 different classes, the entry list is a veritable who’s who of Irish equestrianism from 128cms pony riders right up to CSI*** International riders and everything in between.

Competition in Millstreet continues until Sunday evening. If you’re looking for a family day out with free admission, world-class showjumping, a wide range of trade exhibitors (including saddlery, leisurewear and footwear, pet accessories and more) then look no further than the Millstreet International Horse Show 2015!