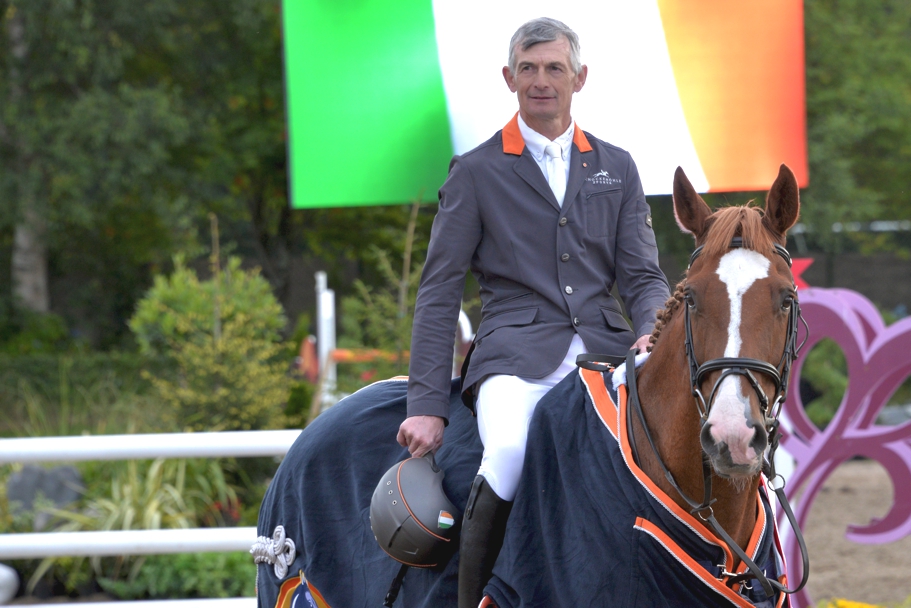 Great Britain’s Laura Renwick won her second international class of the week this afternoon on the penultimate day of the 2015 Millstreet International Horse Show. Having produced two of the four clear rounds, Renwick proceeded to have one fence down with the first of her jump-off horses but came home clear with the fastest time on her second mount, the David Rogers owned gelding Rembrandt Blue. The Essex-based rider’s performance meant that last year’s winner, Ireland’s Dermot Lennon had to settle for second place with Victoria Loane’s Gelvins Touch. Speaking after the competition, Renwick said

The course took some jumping. Having a fence down with my first horse put the pressure on but Rembrandt Blue jumped well and deserved this win.

The Irish Field sponsored Millstreet International Speed Derby always attracts a stellar line-up and the 2015 renewal was no different. Thursday’s International Two Phase winner Vincent Byrne and Mr. Rockefeller set the standard early on in the competition, posting a time of 98.75. Peter Smyth came close to overtaking Byrne with Martin Kenny’s Corrib House but an unfortunate fence down at the top of the bank dropped him down the final leaderboard. Second to last into the arena, Francis Connors knew he’d have his work cut out to overtake the early leader. The Waterford man proceeded to set the Green Glens Arena alight with Hilda Anthony’s traditionally Irish-bred mare Uskerty Diamond Lady, shaving almost a second off the leading time and giving Connors his first International win at Millstreet since 2012.

The young horse classes synonymous with Millstreet and the Duggan Family have kept the team of special judges on their toes all week. Friday night saw one of the strongest renewals of the Irish Farmer’s Journal Young Irelander Final. The judging panel, headed by Great Britain’s Mike Florence commented on the high standard of entries and struggled to decide on the winner with visiting British judges Roland Ferneyhough and Joseph Murphy calling back their top two placed three year old horses for a jump off. In the end, Seamus Carew’s Cardento gelding Kiss was called in first with Kennedy Brother’s Sport Horses OBOS Quality gelding Kbs Lauda taking reserve champion. Tonight, the attention once turns to the Main Indoor Arena where many of the best equestrian producers in the country are represented in the Irish Field National Discovery Final for four year old horses.

The final of the Coolmore Young Champion of Ireland classes got proceedings underway in the Main International Arena on Saturday with separate Grand Prix for the 128cms, 138cms and 148cms divisions. In the 128cms opener, victory went the way of Carlow’s Jason Foley with Ferrybank Roy. The 14 year old who is in his last year of pony competition is enjoying considerable success at the moment having won the 138cms TRI Pony Championships at the DiscoverIreland Dublin Horse Show last weekend. Rhys Williams and PARC Giggles came out on top in a fast-paced 128cms jump-off but the winner after two competitions was Grand Prix runner up Alex Finney with Some Journey. Last year’s 128cms Young Champion of Ireland Ciaran Nallon emerged victorious in the 148cms Grand Prix with Sligo Little James meaning he will join his fellow Young Champions on a once in a life time trip to the London International Horse Show this December.

The 2015 Millstreet International Horse Show got underway on Tuesday and and record crowds have been enjoying the showjumping action under clear blue skies and summer sunshine. Described by many as Ireland’s most complete equestrian event, the show continues to develop since it’s establishment by Noel C. Duggan over 42 years ago. With entries for the various finals included, entries have now exceeded 7,000 with a record 1,300 horses stabled on site. With a schedule featuring over 100 different classes, the entry list is a veritable who’s who of Irish equestrianism from 128cms pony riders right up to CSI*** International riders and everything in between.

Competition in Millstreet continues until tomorrow evening. If you’re looking for a family day out with free admission, world-class showjumping, a wide range of trade exhibitors (including saddlery, leisurewear and footwear, pet accessories and more) then look no further than the Millstreet International Horse Show 2015!