Twomey brings curtain down on Millstreet 2015 with Grand Prix Win 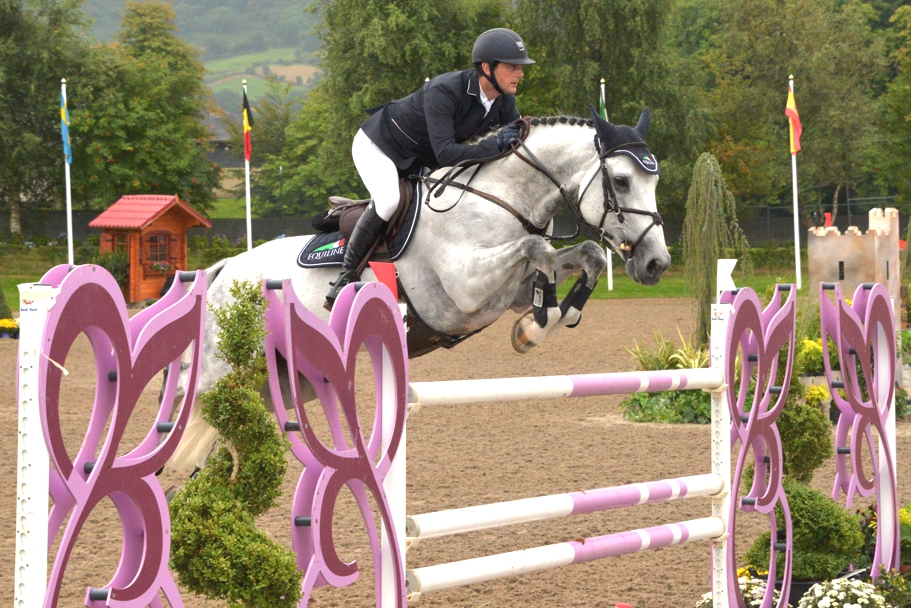 Billy Twomey brought one of the best Millstreet International Horse Shows in recent years to a superb conclusion this afternoon by taking the honours in the feature event, the €50,000 Millstreet International Grand Prix. Last to go in the ten horse jump-off, Twomey knew that he had to go clear and faster than the time of 50.24 set by Peter Moloney and Ribanbelle Tame. A record crowd held their breath as Twomey navigated the Mark McGowan designed course with ease to win the €16,500 first prize with Joe Flynn’s traditionally Irish-bred Ardcolum Duke. The eleven year old Gypsy King gelding is on form at the moment, having won the Accumulator class at last weekend’s Discover Ireland Horse Show and taking second place in the Speed Derby. Speaking after the win, Twomey said

Millstreet is where it all started for me. It’s great to be able to come down here, catch up with friends and family and win the Grand Prix. ‘Im lucky to have a competitive horse like this. He’s Irish-bred and rarely finishes outside of the placings.

Limerick man Paul Kennedy produced the only other double clear of the competition with his mother Jane’s Cartown Danger Mouse while Deane Rogan and Edward Butler held on to their single time faults incurred during the first round. On a high from winning Friday’s Grand Prix Qualifier, Cameron Hanley looked set to be in contention with Antello Z but his omission of the Postbox fence at 7 in the second round unfortunately led to his elimination.

Proceedings in the Main Arena got underway on Sunday morning with the Self Build and Improve 148cms 1.30m Grand Prix. Five combinations made it into the jump-off including two ponies ridden by last year’s runner up Mickey J. Pender. The two times Pony European team silver medalist negotiated the course with ease on both attempts and took the top two positions with Cull Ban Mistress and Zirima.

The final day of Millstreet sees some of the country’s finest young horses compete in the Main Arena each year and the latest renewals of the Millstreet Ruby (5YO) and Boomerang (6/7YO) competitions were no different. In the Gallivan Murphy Hooper Dolan sponsored 5 year old class, 8 horses made it into the final jump off with Leitrim man Ciaran Ward emerging victorious aboard Colm McGrath’s Drumiller Revolution having produced the only clear round. Second place was occupied by Jordan Coyle with Kieran Kennedy’s KBS July Johnson while British visitor Emily Mason took third with Fabian. The following 6/7 Year old Diageo-sponsored final saw ten horses make it into a perfectly balanced jump-off with five six year olds jumping immediately before their seven year old counterparts. In the end, victory went to Sligo-born Richard Howley with his seven year old stallion D. Millfield Darin. Now based in Wetherby, Howley purchased the horse from Geoff Luckett earlier this season and believes he has a real horse for the future.

He’s won some big shows and I think he’s going to be a very good horse. He’s a stallion but he has a nice nature and he never loses his concentration.

Howley shaved just over a second off the time of Australian rider Jake Hunter who had to settle for the runner up position with Sandra Duffy’s Cento Blue while Edward Butler completed the lineup with Michael O’ Callaghan’s Burnt Again.

Sunday also saw the presentation of the 2015 Hitchmough Bursary. With the winner receiving three days of training with top level showjumper Billy Twomey, the six qualified 1.20m Young Riders who went forward to the jump-off knew what was at stake. The pressure proved no boundary for Tipperary’s Darragh Ryan with the former Pony Team medalist and Millstreet Pony Puissance record holder putting in a fast clear to take the Bursary with Furisto’s Jack. When interviewed by ClipmyHorse.tv after his win, Ryan said

I’ve just finished my Leaving Certificate so now I have some time to focus on my horses for the rest of the season. I’m looking forward to the opportunity with Billy – I’ve learned a lot from the time I’ve spent with Greg Broderick recently and now want to pursue a full time career in showjumping.

Saturday evening brought a capacity crowd to the Main Indoor Arena for the Irish Field National Discovery Final for four year old horses. The judges for the class, former Junior and Young Rider Team GBR Chef d’Equipe Michael Florence assisted by Olympian Roland Ferneyhough and professional huntsman and horse producer Joseph Murphy were impressed by the standard of all finalists and had to seek the input of riding judges Pippa Allen and Antonio Marinas Soto to help them choose their winner. In the end, the judges panel decided upon the Richard Bourns owned Call Me Cool Z ridden and presented by Declan Egan. The Clinton I mare impressed all who saw her on the night, including British rider Pippa Allen who rode her in the final round. Egan was impressed with the mare’s performance. ‘She nearly went better for Pippa than she did for me! She’s a lovely mare to ride and Pippa gave her a really sympathetic ride on the night,’ commented Egan when interviewed by MC for the evening, Kieran O’ Donovan. Second place went to the Ars Vivendi gelding Vivendi Time, presented by Seamus Hayes and owned by Denise Ryan.

Today’s events bring a hugely successful 2015 Millstreet International Horse Show to a close. Since Tuesday, the office has processed over 7,000 entries and catered to the needs of those connected to the 1,300 horses stabled on site. Speaking after the Grand Prix, show director Thomas Duggan was delighted with the ending to one of the busiest shows yet. He said,

It’s great to see Billy win the Grand Prix – he started his showjumping career here on 128cms ponies when he was trained by his late aunt Avril Hitchmough and has been a firm Millstreet supporter through the years. We’ve had a record breaking week here in Millstreet but next we turn our attention to our International Horse Trials which take place at the end of the month.