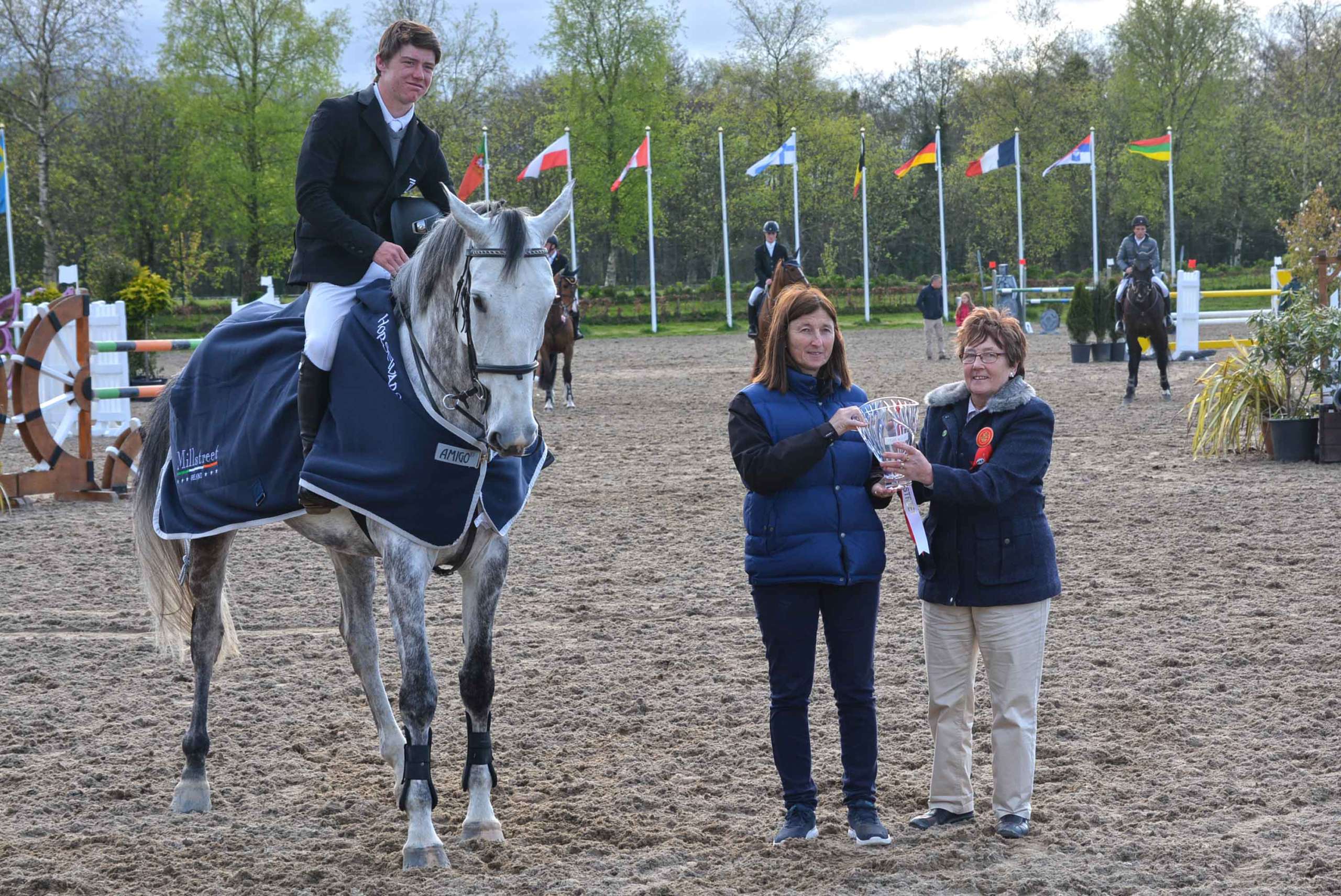 A last minute decision to travel to Millstreet paid off for Michael Pender and HHS California when they took the honours in the Connolly’s RED MILLS International Welcome Tour Grand Prix last Saturday. Thirty combinations came forward to take on the challenge set by International Course Designer James Tarrant. The competition appeared wide open from the start with the first three into the arena leaving the fences standing. A change to the FEI Jumping Rules in 2017 meant that only the top eight combinations (25%) would progress to the second round and as the clear rounds continued to mount, so too did the pressure to deliver in as quick a time as possible. Ultimately, Damien Griffin (Lissyegan Lui Royale), Michelle Kenny (RLE Avalon du Carpont), Kelly Taggart (H Tw0) and Jake Hunter (Robinstown Lux Lovely) had to settle for the lower rankings despite their zero scores, while those above them went on to fight for the lion’s share of the €5,000 prize fund on offer.

Pender had steered two of the eight fastest clears in the qualifying round and quickly set the target of 39.99 seconds in the jump-off with his Cavan Spring Tour winning partner HHS Sevenhouses. Other Spring Tour regulars, Liam O’ Meara (Mr. Coolcaum) and Sven Hadley (Quanbell) were determined to make their mark on the leaderboard and Pender entered the arena on his second ride knowing that he would have to shave 1.3 seconds from his previous time to stay in front of his two main contenders. Last July, the Kildare man had entered the Green Glens International Arena as the highest placed Irish rider in the Junior European Showjumping Championships (7th) and that class proved evident again as he rode Marion Hughes’ seven year old Heritage Fortunus-bred grey mare to victory, stopping the clock at 38.16. Twenty four hours previously, the combination had been in the winners enclosure after an exhilarating 1.25m – 1.30m CSI1* Table A class. Coming midway through a thirteen horse jump-off, Tipperary’s Liam O’ Meara had set the standard (35.67) with Kenny’s Flight. This proved untouched until Pender produced a clear in 34.12 seconds. Last into the arena, Shane Dalton looked to be matching the pace with Bernard and Josephine Jordan’s eight year old stallion Clonguish Vivaro but ultimately they slotted in to second place in the final rankings (35.45).

The Millstreet Welcome Tour is now in its fifth year and eight nations were represented across the 111 events that took place over eight days of competition. Amongst the 3,500 entries processed were representatives from Germany, the USA, France and Australia. British event rider Laura Ritchie-Bland contested the CSI1* classes with SRS Everest and Shadow Evergreen en route to competing in the CIC2* class at Ballindenisk International this weekend. Irish event riders were also catered for with many availing of the FEI Combined Training classes added to the schedule, including Badminton Horse Trials bound riders Michael Ryan and Dominic Furnell. Another eventing legend to make a surprise appearance was PJ Hegarty’s Ricardo Z mare Fenya’s Elegance who participated in one of a series of interactive demonstrations and inspections hosted by the Warmblook Studbook of Ireland in the Indoor Arena during the Welcome Tour.

The International action got underway on Thursday afternoon when regular Millstreet visitor Sven Hadley got his week off to a winning start with Quanbell in the CSI1* 1.25m Table A class, stopping the clock four seconds ahead of Cian Harrison (Wannahave) while Tom Hearne had to settle for third place with Intis. Hadley proceeded to maintain a strong hold on International proceedings, securing a top 3 placing in four of the remaining five CSI1* classes with the 13 year old Quentin gelding. The first of the Grand Prix Qualifiers saw Galwegians dominate the leaderboard when Damien Griffin took the top two places in the Two Phase class with Lissyegan Lui Royale and Tabby while his Western counterpart Hadley placed third and fourth with Quanbell and Sumas Taloubet respectively. In the following afternoon’s 1.30m CSI1* Table C class, Hadley found himself in podium position once again following a faultless performance with Sumas Taloubet, ahead of Shane Dalton and Clonguish Vivaro in second and Australia’s Jake Hunter completing the line-up with Knightfield Ella. A timing anomaly in Saturday’s CSI1* 1.25m Two Phase saw Hadley (Quanbell) ultimately share the winners position with Liam O’ Meara who had posted a lightning-speed second phase time of 23.72 seconds.

Aside from the International action, the Welcome Tour is renowned for the opportunities provided for young horses, with many progressing throughout the show. A number of valuable qualifying slots for the Young Horse Championships at Millstreet International Horse Show were on offer and Tim MacDonagh and Shane Dalton were delighted to secure places in the Millstreet Ruby 5 Year Old Final with Hickstead Musterd and Lux Like Cruise respectively. The 6/7 Year Old Final on Saturday morning saw 15 horses qualify for the jump-off. In the end, Jake Hunter put his name on the two qualifying slots for August’s Boomerang 6/7 Year Old Championship with the six year old Karandasj gelding Kepi Vert Du Buisson Z and the seven year old Verdi gelding Ferdumelion.

The national competition arenas were kept particularly busy throughout the Welcome Tour and 43 horses came forward for the 1.20m – 1.25m Final on Saturday morning. Placed in the 1.20m class on Thursday, Daniel Fitzgerald went two places better to take home the red rosette with Julieann Gaffney’s Gucci Lady, leaving resident Fernhill Sport Horses rider Fraser Duffy in second place with Fernhill Charlie. Placed in two five year old classes during the week, Shane Goggins went all the way in the 1.10m – 1.15m Final with Connaught Bloodstock’s Cruising-bred stallion Silvermines Cruising, meaning that Mikey Pender had to settle for the runner up position with HHS Tokyo. At 1.00m level, the hotly contested final went the way of Nicholas Canavan and Clover Falcon with Andrew Byrne finishing in second with Hunterslodge Puissance.

With the curtain coming down on another Millstreet Welcome Tour, equestrian action returns to the Green Glens Arena on Saturday 6th May when the Duggan Family host an ‘all-weather’ Eventing Ireland One Day Event at EI100 and EI90 level before the attention turns to the Cross Country course in Drishane Castle for the FEI European Eventing Championships for Young Riders and Juniors in July and Millstreet International Horse Show slotting in before the Dublin Horse Show from 2nd – 6th August.