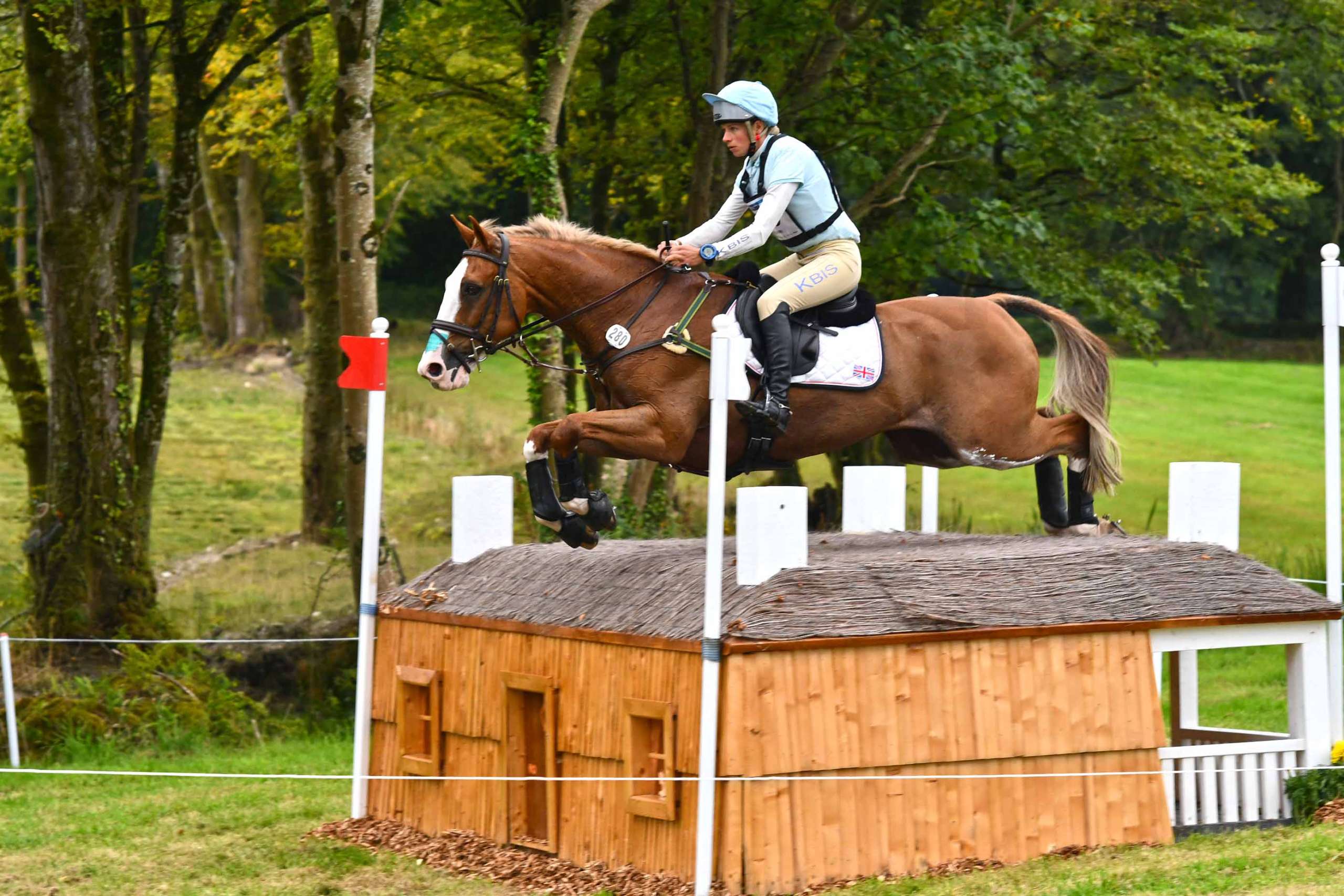 Great Britain’s Izzy Taylor recorded her second success of the week at Millstreet in Co. Cork this afternoon as she won the feature Noel C. Duggan Engineering CCI3* on the closing day of the 2017 Millstreet International Horse Trials. Riding Alex Phillips 15-year-old warmblood gelding ‘Perfect Stranger,’ the regular visitor to Ireland and recent winner of the CIC3* class at Kilguilkey House International was lying in second place after dressage and cross country, just behind New Zealand’s Blyth Tait (Havanna van’t Castaneahof). Sunday’s show-jumping action was influential and the time allowed proved hard to get. Tait had two horses placed in the top three coming in to the show-jumping arena and proved that a clear round inside the time could be achieved with his first ride, ‘Darius.’ The winner of the Connolly’s RED MILLS CIC3* class the previous evening, Izzy Taylor delivered a clear round timed to perfection with ‘Perfect Stranger’ and put the pressure on the overnight leader. Last to jump with ‘Havanna van’t Castaneahof,’ Blyth Tait’s chances of success came to an unfortunate end early in the James Tarrant-designed track when he lowered the first two fences. Proceeding to incur two time faults, Tait dropped down to third place behind his first ride. First-time visitor to Millstreet from the USA, Jennie Brannigan picked up just a single time penalty to complete in fourth place with ‘Stella Artois.’

Earlier in the day, Jodie O’ Keefe gave Ireland a home win in the Sport Ireland CCI2* class with her father Joe’s ‘Reenmore Duke’. Ranked third after the dressage phase, the Mallow native added just a single cross-country time fault to her dressage score; completing on 48.8 penalties. Rosie Fry produced the only double clear round of the competition when she took second place with ‘Arise Cavalier’ ahead of Kildare-based Cathal Daniels with OLS Back Chat.

The Horse Sport Ireland CCI1* opened proceedings on the final day of competition. The leader since the dressage phase, Annie Bellamy (GBR) made her first competitive trip to Ireland worthwhile when she maintained a clean score sheet to top the final standings with her own seven-year-old mare ‘Grafik.’ Less than a penalty behind on the leaderboard, Australian athlete Emma McNab maintained her second place position with ‘Inxs’ while Irish rider Jonty Evans completed the top three with ‘Gambesie.’ All eyes had been on the British-based rider on Saturday afternoon when he headed into the deciding cross-country phase in the Connolly’s RED MILLS CIC3* class with ‘Cooley Rorkes Drift.’ The 2016 winner and pathfinder for the class, Izzy Taylor (Be Touchable) produced what turned out to be the only clear round inside the optimum time to retain her title with the Sophie Dodds’-owned gelding. Making his first competitive appearance on the eleven-year-old gelding having secured ownership after a €550,000 crowd funding campaign, Evans and ‘Art’ looked set to maintain their runner-up position in the class but an unfortunate slip on the flat just before the Global Event Horses Wallis Water complex (16) saw them part company and ended their chances, leaving the door open for American visitor Kim Severson (‘Cooley Cross Border’) to move up to second place having added just 2.4 time penalties to her dressage score. Andrew Hoy moved up the leaderboard to take eventual third place with Rutherglen. The Australian native was making his first trip to Millstreet with his wife Stefanie and new-born daughter Philippa Isabel Jane. Dublin’s Ciaran Glynn proved to be the best of the Irish, taking fourth place with ‘November Night.’

The Eventing Ireland CIC2* proved to be a truly International affair with five nations represented inside the final top ten. A regular visitor to Millstreet International, Jesse Campbell (NZL) added another Millstreet win to his collection, this time with Gary Harding’s 11 year-old gelding ‘Amsterdam 21.’ Just six combinations finished on their dressage scores, including Great Britain’s Laura Collett who took second and third place with ‘London 52’ and ‘Cooley Again’ respectively. Fresh from her top ten individual performance at the FEI European Eventing Championships in Strzegom, Poland, Meath rider Sarah Ennis was the best Irish rider in the class, completing in seventh place with ‘Woodcourt Garrison.’ The notes of ‘Amhran na bhFiann’ had rung out across the Green Glens Arena just twenty-four hours previously when Irish rider Charlotte Dixon emerged on top of a 68 strong field in the Gallivan Murphy Hooper Dolan CIC* with her mother Barbara’s 15-year-old gelding ‘V Zermie 51.’ British visitor Tallulah Bartlett finished just over two penalties behind with ‘Candyman Leanorth,’ while Alfie Marshall completed the top three with ‘Tiggity Boo.’

The Irish Sport Horse Studbook sponsored CIC*YH once again proved to be an important step in the selection process for the Irish horses heading to the FEI World Eventing Championships for Young Horses in Le Lion later in the year. Tipperary-born Katie O’ Sullivan held on to the lead from the start with the Cooley Farm’s Irish Sport Horse ‘AKD Cooley Lockdown;’ completing on a penalty score of 37.1 having added just 0.4 across the country. Elizabeth Power took second with ‘DSL The Entertainer,’ just ahead of British rider Tobias Pigott with ‘Lance a Little.’ The Irish Sport Horse Studbook also supported the National Eventing Discovery classes for four and five year old horses and following the preliminary round on Saturday night, the top eight in each section performed in the International Arena where the final results were decided. A judging panel consisting of FEI International judges, selectors and coaches were on hand to assess each of the finalists and Cathal Daniels’ ‘Ei Tannarette DHI’ was the highest scoring five year old while Kelley Hutchinson’s Sligo Candy Boy sired gelding ‘HSH Luska Legend’ came out on top in the four year old division.

As the last truck leaves the Green Glens Arena, the curtain comes down on a busy summer of equestrian sport at the Cork venue which hosted the FEI European Eventing Championships for Young Riders and Juniors in July before staging the annual CSI2* International Horse Show at the start of August.