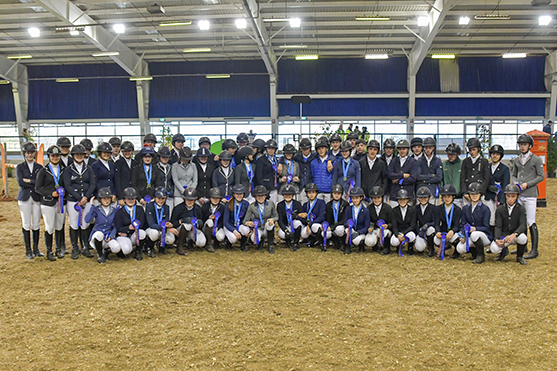 Another exceptional year of equestrian action in Millstreet was brought to a close last weekend as the Duggan family and the Millstreet team hosted the 32nd Owner’s Pony and Young Riders Charity Show. Hosted at the Green Glens Arena at no charge for nearly 20 years, close to €350,000 has been donated to a growing list of charities since the show was established; primarily in the areas of children and animals. Organising committee member Ciara Holland was delighted to report that the 2018 show was one of the most successful yet, with nearly 3,500 entries received and over 600 horses and ponies stabled on site during the weekend.

A small but dedicated group of people put the show together every year and the Committee are particularly grateful to those who supported the 2018 edition by sponsoring classes, making donations, supporting the Charity Auction or giving their time during the weekend as a judge or volunteer. Nadia Rea and Paddy McCarthy of Horse Sport Ireland  were on hand on Sunday to present special awards in each of the pony grand prix classes to the 2 highest placed ponies that were registered in an approved studbook. Currently on the side-lines but keeping up to date with the show was show-jumping judge Jimmy Ivers. Known to many as the ‘small man with a big voice,’ Jimmy and his Johnny Cash music collection have been long-standing elements of the Owners Charity Show. The Waterford man is currently awaiting surgery to get him back on his feet and a variety of fundraising efforts are taking place to support him; including a raffle held during the show which contributed over €1,500 to the fund.

The Owners Charity Show is one of the biggest of its kind and has become a cornerstone of the pony and young rider competition calendar. Over 1,000 animals jumped each day across six competition arenas and the weather gods played their part; rain on Friday cleared away leaving largely cool and bright conditions for the remainder of the show. On Saturday afternoon, nearly sixty pony riders assembled in the Indoor Arena for the annual parade of ‘Retiring Riders.’ Amongst those moving out of the pony ranks was Kilkenny-based Seamus Hughes-Kennedy; the overall winner of the 2017 FEI Pony Jumping Trophy in Mechelen, Belgium. Hughes-Kennedy began his international career in the Millstreet Indoor two years ago and since then has taken victories on the continent in Fontainebleau, Opglabbeek and Lier. Fresh from a Grand Prix win in Herning, Molly Hughes Bravo was also in the line-up of retiring pony riders along with fellow team member from the 2016European Children on Horses Jumping Championship squad Robyn Fagan. Already making his mark at senior level, Mayo’s Ciaran Nallon travelled to Millstreet to formally mark the end of his pony competition days. Before the awards were presented, a stirring moment of applause echoed around the building as commentator Noel Coleman asked those present to remember their much missed fellow showjumper and friend Jack Dodd – a familiar face at past shows in Millstreet. Having received their Retiring Rider awards, the action turned up a notch later in the evening as the fast-paced fancy dress relay competition brought a capacity crowd to their feet with an unlikely bunch of film and television characters, nuns, animals and familiar show-jumping riders taking part.

The extra hour in bed on Saturday night gave those taking part in the Equestrian World of Maynooth 128cm 1.00m Grand Prix an extra spring in their step early on Sunday morning. Thirty combinations came forward with thirteen making it into the deciding round over the James Tarrant designed course. In the end,Chloe Hughes-Kennedy delivered the fastest of the four clear rounds in the jump-off (33.46 seconds) with the Clare Hughes owned Touch of Magic. Separated by over 5 seconds, Katie Nallon took second place (38.65 seconds) aboard Sandra Nallon’s Jimm while Calum Harte rode Christine Harte’s Tantassig Mist into a third place finish (41.73 seconds) and also secured the bonus prize money offered by Horse Sport Ireland to the highest-placed studbook registered pony. Clare’s Lily O’ Dea (Newhaven Nikita) accounted for fourth place while a fifth place finish for Ellen Power with Sasha contributed to her points earned during the week and ultimately saw her receive the leading Girl Rider title at the end of the show.

Amongst the riders visiting Millstreet last weekend, the Owners Charity Show committee were delighted to welcome three young riders from Australia who lit up the show. Part of the Duffy Sport Horses contingent, Zenniah Albonetti, La’Moza Velisha and Harley McNaughton are thoroughly enjoying their time in Ireland and hope to take in a few more shows before they head back to warmer climes. La’Moza came into the Tailored Equestrian 138cm 1.10m Grand Prix with two wins under her belt and looked set to add a third when she produced one of the four clear opening rounds of the class. However, it wasn’t to be as a rail down saw her take second place in the final standings with the Duffy Sport Horses owned King Ka Ching. Double handed in the jump-off, Kilkenny’s Robin Carey produced the only double clear of the competition to take the win with Kieran Carey’s seven year old mare Bay Times, having won the Grand Prix qualifier the previous afternoon. Two rails down saw him take 4th with the Ballywalter Farms owned Chocolate Sauce, just behind Sarah Fitzgerald (Strandfield Ruby). Carey’s two victories saw him leap ahead in the final rankings; taking the Leading Boy Rider title at the conclusion of the show.

Thirty-five combinations contested the O’ Brien’s Saddlery 148cm1.20m Grand Prix with ten advancing to the jump-off. Second to go in the deciding round, Molly Ryan set a target of a clear round in a time of 29.53 seconds with Fiona Deegan’s eight-year-old mare HHS Chillax. Another of the riders departing from the pony competition ranks at the end of the year, Ryans’ time remained unbeaten; earning her the victory and seeing the final of the three pony grand prix trophies heading back to Kilkenny. Riding for Liam Clancy, Ella Clancy put in a great performance but had to settle for second place when stopping the clock at 29.95 seconds with Fernando while Niamh McEvoy completed the top three with Fireman (30.12 seconds); just ahead of the last of the double clear performances from Orla Duffy with Sunny Jr (32.01 seconds). James Connors Smyth (KEC Sofia) and Seamus Hughes Kennedy (Keatingstown Hunky Dory) were both up on the clock but took uncharacteristic falls at the turn-back to the penultimate fence on the jump-off course.

The pony competition action in the Indoor Arena came to a thrilling conclusion with the U10 Grand Final. Ten combinations had qualified earlier in the day for the class which was sponsored by Holland Homes Durrow and Alanna Fagan made the journey from Mullingar worthwhile when taking the top two places with MillField Duke (21.99 seconds) and Derravaragh Blue Stone (22.35 seconds). GemmaBuckley (Hollycreek Oran Splendour) was the only other rider to deliver a double clear and took third place.

As daylight faded, the action returned to the Indoor Arena where those spectators remaining were rewarded with a thrilling fourteen strong jump-off in the 1.20m Young Rider Grand Prix. Having placed third in the Young Rider Derby on Saturday afternoon, all eyes were on Meadhbh Mealiff (Plamas). Second to jump in the deciding round with the Jim Bolger owned eight-year-old Cavalier Royale gelding, Mealiff made her way around the jump-off course faultlessly in a time of 32.12 seconds. Sven Hadley (Vvood Stock de Breve) and Chloe Fagan (Caricello) came close to threatening Mealiff’s lead but the Offaly rider was left tasting victory until the final round when Cian Harrison and Mr.Big Cash secured the winners cheque by shaving almost a second off the target time; breaking the beam at 31.22 seconds. A rail down in the deciding round with Emma (BWB) kept Mark Finerty out of Grand Prix contention but cumulative points across the show, including a win in the 1.30m Grand Prix qualifier on Saturday night ultimately delivered a tie with Ciaran Nallon for the Leading Young Rider trophy which was presented on the night by founding member of the Owners Charity Show, Keith Griffin.