Millstreet to join the Event Rider Masters Series in 2019! 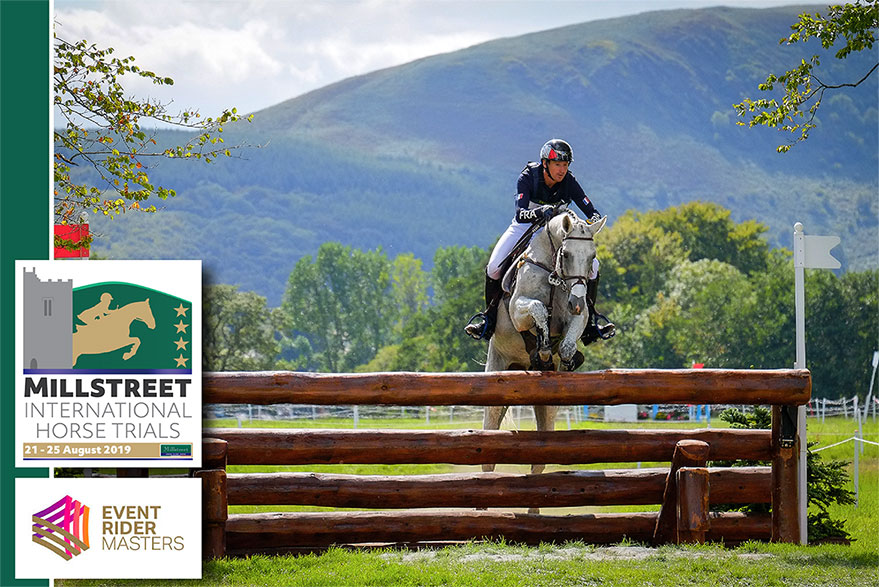 The Millstreet Horse Trials Organising Committee are thrilled to announce that the 2019 International Horse Trials will form part of the Event Rider Masters series.

Launched in 2016, ERM condenses the traditional equestrian three-day event into two days. Including all three disciplines – Dressage, Show Jumping and Cross Country, each phase of every world-class competitor is live streamed and included in a post produced television highlights show which airs in 101 countries worldwide.
ERM is the most valuable Series in the sport of Eventing. It provides the world’s most successful Event Riders with an international stage on which to compete for an unprecedented total prize-money fund of £350,000. The prize pot for the UK leg is £50,000 while each European leg offers €57,000. The riders compete for the much-coveted ERM Series Championship Title and an additional £50,000 series prize fund shared by the top three riders at the end of the season.

Millstreet will form the penultimate leg of the 2019 series which starts in Chatsworth (Great Britain) in May and takes in venues in Germany, Belgium and France before the series finale at the Concours Complet International Lignières en Berry in France in October.

The Duggan Family are no stranger to hosting top-class competition at the famous Co. Cork facility and since hosting their first Horse Show in the early 1970’s, the ‘Green Glens Arena’ has proceeded to welcome some of the biggest names in the world of show-jumping and eventing. In the past, the venue has hosted multiple FEI World Cup qualifiers and European Championships. In Spring 2014, the development of a cross-country course designed by Mike Etherington-Smith in the adjoining Drishane Castle Demesne promoted the venue on to the eventing stage and the FEI European Championships for Ponies were held to great acclaim later that year.

The Millstreet ERM leg will take place alongside the traditional classes from CCI2*-S to CCI4*-L during Millstreet International Horse Trials which take place from 21st – 25th August.

We are absolutely thrilled to join the Event Rider Masters calendar. I have followed the series with interest since it started and with the ever-improving standards in Irish eventing, there is no better time for the traditional ‘Land of the Horse’ to form part of the ERM series. Last year, we witnessed International team eventing at the highest level when we hosted the Irish leg of the FEI Eventing Nations Cup and on the back of that, the team in Millstreet are very much looking forward to welcoming the world’s greatest event riders to compete in the most valuable individual series in the sport of eventing.

Speaking at the launch of the 2019 ERM, Jim O’ Toole, CEO of Event Rider Masters said:

This new six month calendar provides a significant moment in the  development of our series as we add two legs and in the case of Ireland, a brand new market.  With events in five broadcast markets across Europe, we see our international expansion as fundamental to the continued growth of our series, both as an elite global sporting competition and as a media broadcast platform.  2018 saw dramatic growth in the value we created for our partners and venues with 2.4 million audited television viewers and a digital community in excess of 1.3 million fans engaging with the series across multiple digital platforms. We anticipate further growth in 2019 as our world class riders compete for the unprecedented prize fund and ERM Podium glory.

Find out more about the Event Rider Masters.

Editors’ Note
Launched in 2016, the Event Rider Masters series comprises 6 legs each encompassing 3 phases, where each phase is completed by the same horse and rider combination. Phase 1 Dressage, Phase 2 Show Jumping and Phase 3 Cross Country; all at the CCI4*S level of Federation Equestrian Internationale (FEI) approved competition. Dressage and Show Jumping are arena based, while Cross Country covers a track of between 3.4 kms and 4kms in length comprising between 30 – 35 solid jumping obstacles.