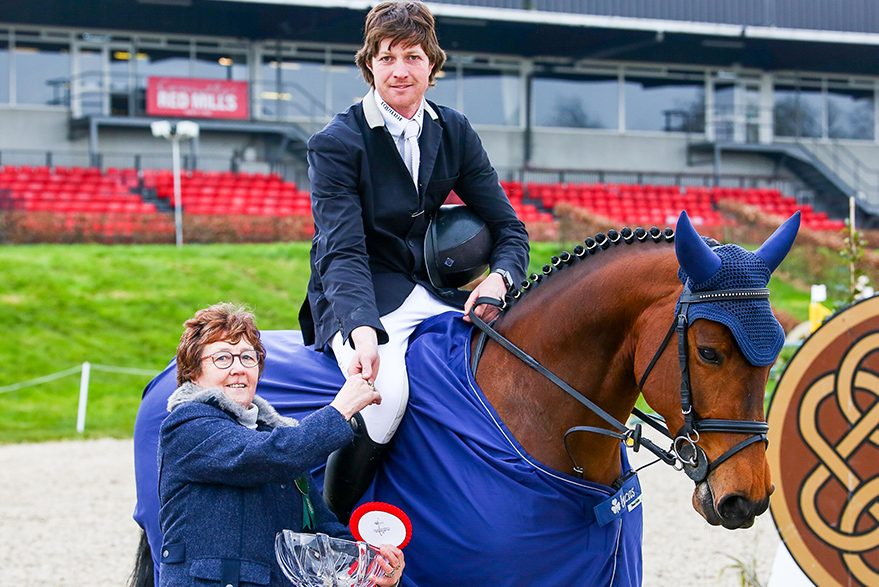 The 2019 show-jumping season at Millstreet’s Green Glens Arena got off to its traditional start as the Duggan Family and their team hosted the latest renewal of the International Welcome Tour.Established seven years ago, the show is now a core fixture in the spring competition schedule for a wide variety of young horse producers and the CSI1* classes provide FEI experience for developing horses and riders at a fraction of the regular International costs. With the Easter weekend falling late in the calendar this year, the decision was taken to hold the show in the date it has occupied in recent years and the condensed five-day format paid off with numbers up almost 5% on average each day. During the week, over 340 riders from eight nations participated and more than 800 horses passed through the gates of the Green Glens Arena. Those that made the journey to Millstreet were rewarded with clear skies for the most part; although thermal clothing was the order of the day for those that braved the bitter cold and wintery showers that persevered for much of Friday.

Riders from the North and West of Ireland dominated the start lists each day but amongst the names that stood out were a delegation of British riders who had travelled to the show for the first time. Making his international debut, John Brannen secured a top five placing in the penultimate class of the week, having travelled over with Emma Forster, Adam Valks and Chloe Page who also picked up a string of placings during the week. Having completed the CCI4*-S at Belton two weekends ago, event rider Laura Ritchie-Bland travelled to Millstreet to take part in her second Welcome Tour and will now base herself in Co. Wexford ahead of Ballindenisk International Horse Trials later this month. Although the scheduled spring eventing fixtures in Millstreet did not go ahead, a number of eventing establishments were represented during the show; with a select few benefitting from the Combined Training that was held on Thursday in the confines of an International standard dressage arena. Michael and Patricia Ryan recorded a plethora of placings during the week while Cathal Daniels picked up a number of top five finishes and Carol Gee’s Fernhill Sport Horse team dominated the young horse classes every day.

Commenting as the last trucks pulled out of the Green Glens Arena on Monday morning, Millstreet organiser Thomas Duggan said:

It’s been a very busy week and we are all extremely grateful to our team of judges and officials who put in some very long hours. I think that as a show, the Welcome Tour is constantly evolving; the tweaks that we made this year will be reviewed and the feedback we receive will feed into next year’s plans.

Thomas O’ Brien landed his second Grand Prix title in as many weeks last Sunday as he took the honours in the Millstreet International Welcome Tour Grand Prix. The Athenry based rider had travelled to the Green Glens Arena on the back of a successful Spring Tour Grand Prix at Maryville Stables where he claimed victory with his ten year old mare Miss Darco. With a string of nearly twenty horses on site for the week, O’ Brien didn’t have much time to spend on the ground; amassing over 60 competitive jumping rounds across the five day show and securing a top five placing on 25% of those occasions. A win with Miss Darco in the opening Grand Prix qualifier on Friday saw several put their money on O’ Brien in Sunday’s Welcome Tour finale and the pairing found themselves drawn last but one of the 34 starters in what ultimately proved to be a thrilling competition.

Course designers James Tarrant and Gueorgui Gueorguiev had been on duty in the International Arena for the week and assembled a traditional Millstreet course that tested the very best. Fourth into the ring, Sean Monaghan was the first to secure a ticket into the deciding round when he delivered a faultless performance with Linda Courtney’s Indoctro gelding Empty Pockets. The nine-year-old gelding won the Four Year Old National Discovery Final at Millstreet in 2014; just days after Monaghan had helped the Irish Pony team claim Silver at the European Championships for Ponies at the same venue. Next in, Daniel McAlinden produced a second clear in quick succession with Leanorth Soda Pop; despite coming close to the 78 second time allowed set by the course designers. Thomas O’ Brien was one of nine riders that were double-handed in the opening round; an unlucky rail down at the final part of the combination kept him out of contention with his first ride, Rockwood Pablo. Travelling to Millstreet from Co. Sligo, Richard Kerins was the next rider to qualify for the deciding round when Frank Kelly’s nine-year-old Hermes de Reve mare Achonry Carie left all the fences standing. Another regular visitor to Millstreet, Tim MacDonagh (Mr Boom Boom) was the next to find himself in contention in the deciding round, quickly followed by Paul Kennedy (Star La Tuiliere), Robert Harrison (Landlystes Rubina) and John Floody (Donevan Erkindale). With their second rides, Cian Harrison (Tabby) and Jessica Burke (Greenvale Draco) also found themselves with a chance of Grand Prix victory before O’ Brien returned and earned his jump-off ticket with Miss Darco.

The deciding round took place over a new course; with riders returning to the arena in reverse order of standing. Pathfinder Daniel McAlinden (Leanorth Soda Pop) lowered three fences but fellow Galway native Jessica Burke set the standard with her eight-year-old Greenvale Draco when stopping the clock at 46.52 seconds. Two rounds later. the lead transferred to John Floody (Donevan Erkindale) after he broke the beam at 46.31 seconds. Clear rounds followed from Sean Monaghan and Robert Harrison but Floody’s position remained unchallenged until Thomas O’ Brien entered the arena and delivered one of the rounds of the week; shaving seven hundredths of a second off the target time (46.23 seconds). Quickest in the first round, all eyes were on Cian Harrison (Tabby) but a time of 47.59 seconds saw them settle for fourth place in the final rankings and secured O’ Brien the first FEI Grand Prix victory of his career. “I’d seen a few of the early ones go in the second round,” said O’ Brien after the class.

I knew the class would be won or lost on the turn back from the Liverpool to the double and luckily I judged it right! I’ve been competing in Millstreet since I was ten and have won a lot of classes over the years but to add this CSI1* Grand Prix to the list and have my parents here to watch was very special.