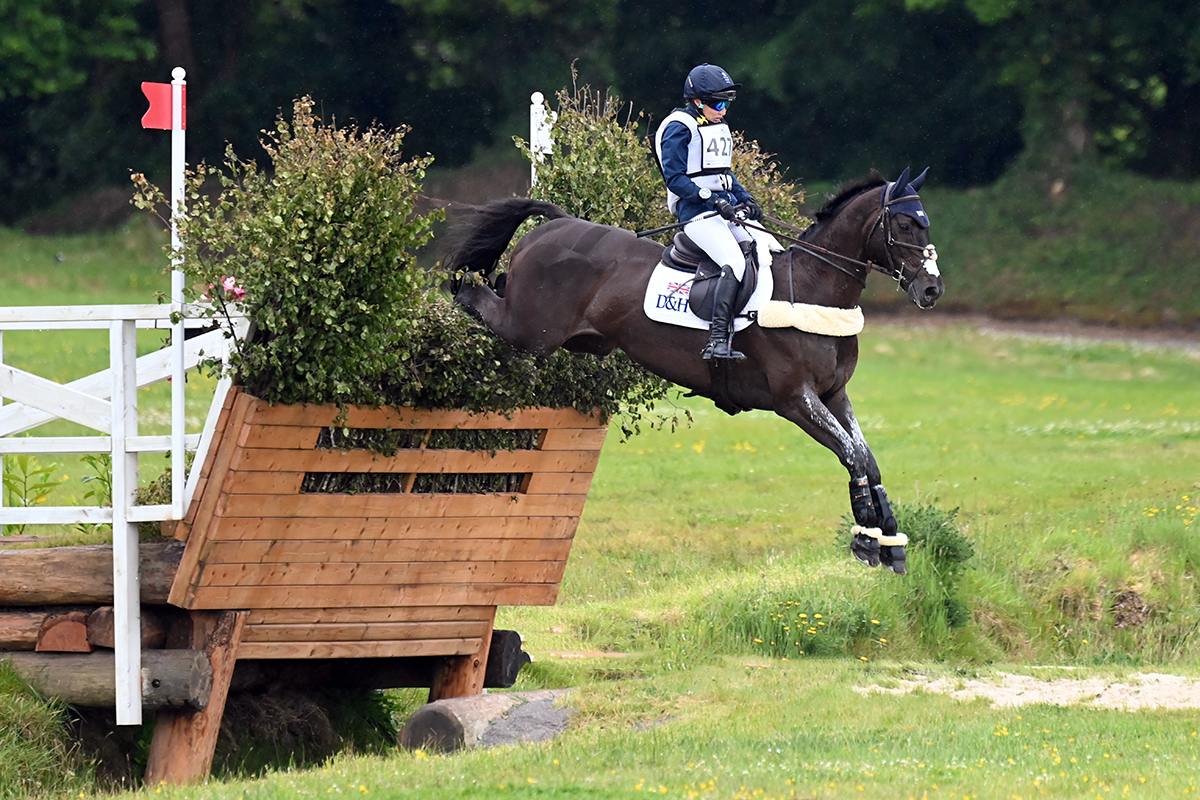 Cross-country day at the Millstreet International Horse Trials in Co Cork, Ireland, lived up to expectations, providing thrilling sport and a great spectacle in the beautiful surrounds of Drishane Castle at the Duggan family’s Green Glens Arena.

It was a particular triumph for British Olympian Laura Collett who retained her lead in both the Horse Sport Ireland CCI4*-L and the Noel C. Duggan Engineering CCI3*-L.

Six nations are represented in the CCI4*-L top 12, with Laura at the head of affairs after a copybook round on the handsome Dacapo, owned by Diana Chappell, Carolyn Taylor, Gillian Morris-Adams and Michael and Alison Smedley; they incurred 2.4 time penalties and now do not have a rail in hand going into tomorrow’s final show jumping phase.

New Zealanders are here in force and Clarke Johnstone, who has arrived in the Northern Hemisphere for the season, produced two out of the three rounds inside the optimum time. He has risen impressively up the order to lie second on Aces High and sixth on Menlo Park.

Australian rider Clayton Fredericks’s journey from States paid off and his superb round on Fe Coldplay has elevated him five places from eighth to third overnight.

Tim Price is fourth and eighth for New Zealand on new ride Coup de Coeur Dedevin and Happy Boy, and Elizabeth Power did the home nation proud in fifth place on Senza Fine.

Bill Levett, a 4* winner at Millstreet last year, is seventh for Australia on Sligo Candy Cane and his compatriot Kevin McNab, the dressage runner-up, is 10th with 10.8 time penalties on Willunga, the Aussies split by Ireland’s Cathal Daniels in ninth on CDS Cairnview Romulu.

Arthur Duffort, the sole French rider, is 11th on Arko’s Lad and Japanese competitor Ryuzo Kitajima looks to have secured a world championship qualification on the lovely mare Cekatinka JRA in 12th.

Willa Newton, third after dressage on Cock A Doodle Doo, had the bad luck to trigger a frangible pin at fence 24 and has dropped to 15th.

Laura Collett retained her CCI3*-L lead in with a superb attacking round on the eight-year-old Outback, described by commentator Clare Ryan as having ‘an elastic gallop’. However, scores are incredibly tight with the price of one show jumping rail covering the top nine horses.

In the Donagh Hickey Motors CCI2*-L, New Zealander Jonelle Price had a cracking ride on Therese Miller and Julia Lukas’s Fernhill Kankan. The seven-year-old black mare was a purchase from Carol Gee last year and looks right up Jonelle’s street.. ‘She will have learnt a lot, which is what it’s all about here at Millstreet,’ she said.

They were one of 16 combinations inside the optimum time and hold a fractional lead of 0.7pen over Ireland’s Patrick Whelan riding the seven-year-old Irish Sport Horse Altitu going into the final show jumping phase tomorrow.

By this late stage of the afternoon it was pouring with rain and no one achieved the optimum time, but Kirsty’s 5.6 time penalties, the joint fastest, were enough to give her a clear lead over Ireland’s Cathal Daniels, who finished second and third on LEB Lias Jewel and his gallant veteran medal-winning mare Rioghan Run.

It was a case of reparation for the winning pair, who were pathfinders at Badminton before incurring refusals at a double of corners on the way home. ‘I feel I can put it to bed now,’ said Kirsty. ‘She gave me an absolutely lovely ride. It was a beautiful course and the ground was phenomenal. This is my first time at Millstreet and I’m definitely coming back; it’s a great place.’

Ireland’s Stephanie Stammschroer and Master Swatch had taken over the lead with a clear show jumping round, but fell at a downhill double of corners on the cross-country.

It remains to be seen whether Kirsty Chabert can recover her lead in the Noel C. Duggan Engineering CCI2*-S. Her 4.4 show jumping penalties on Heraldiks Girl Opposition leave her 2.6 penalties in arrears of the new leader, Ireland’s Alison Holden on Lates Eddie, before tomorrow’s cross-country.

Josh Williamson, son of the former top National Hunt jockey Norman Williamson, and Ardeo Fireman are still at the head of affairs in the Equine Warehouse Pony CCI2*-S. They were one of only two combinations inside the the optimum cross-country time of 5 mins 41 secs and have a fence in hand going into tomorrow’s final show jumping phase.

Tomorrow’s action, both show jumping and cross-country, starts at 8am.

The Duggan family have long been steeped in the Irish equestrian world, producing top-class competition horses and hosting international competitions. They are currently providing accommodation to some 300 Ukrainian refugees.