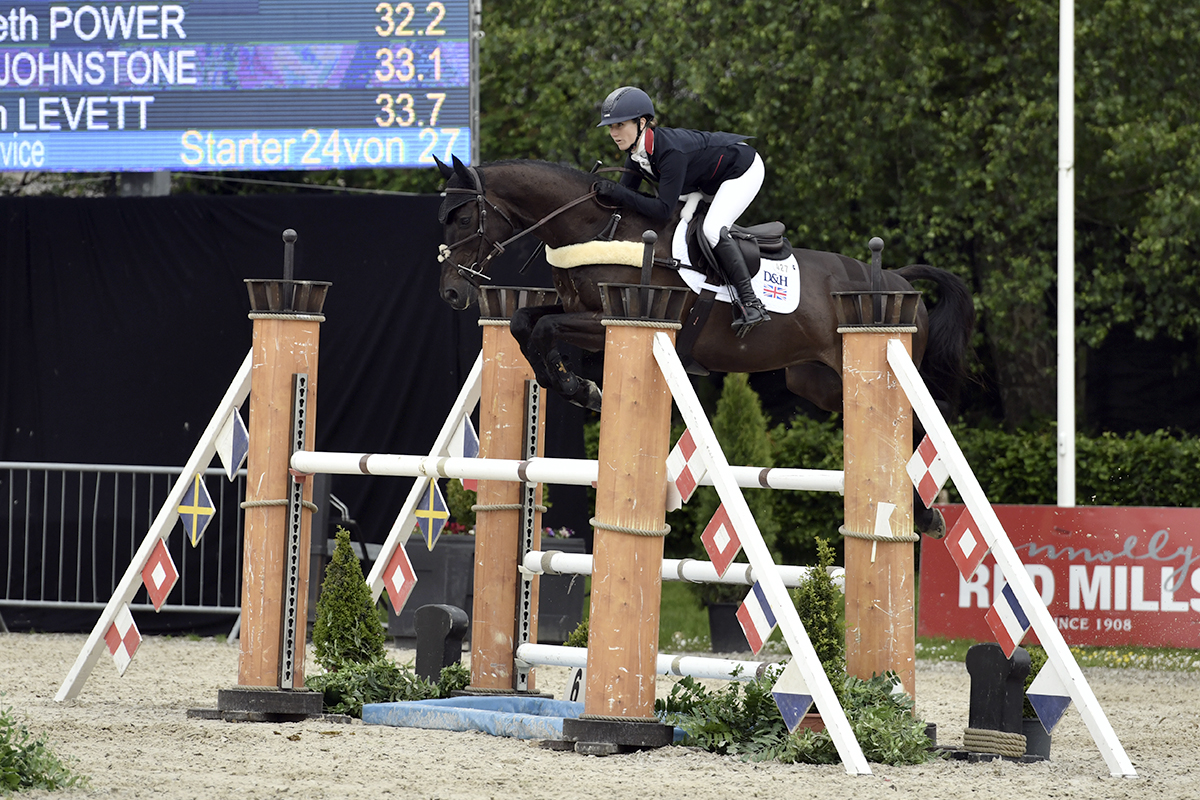 Badminton Horse Trials champion Laura Collett added two more International wins to her record this afternoon when taking the honours in the Horse Sport Ireland CCI4*L and Noel C. Duggan Engineering CCI3*L. The Tokyo Olympic Team Gold medallist led from the outset in both competitions and clear rounds in the deciding show-jumping phase saw her secure victory in the CCI4*L with Dacapo, having added just 2.4 cross country time penalties to her dressage score. A short time later, Collett completed the double, when showjumping clear in the CCI3*L with Outback to finish on their dressage score, bringing to an end a great weekend of eventing action for more than 320 horses, nearly 100 of which had crossed the Irish Sea.

‘She is very much my type,’ said Jonelle of the smart black mare. ‘She’s athletic and when Carol Gee [producer] sent me the video I loved her straight away. She’s pretty green still, but I took her to Spain to jump on the Vejer de la Frontera series which really set her up. The plan was to come here and tick the box with a view to going to Le Lion d’Angers [World Young Horse Championships] in October if she is ready.’

The final scoresheet was tight in the Foran Equine CCI3*-S and at the very end of the cross-country phase victory eventually went to the experienced Irish team rider Clare Abbott on Sarah Riley’s German-bred DHI No Fear, a nine-year-old by Non Stop.

Another big Irish name, Sam Watson, was in second place, just 0.7pen in arrears, on Ballyneety Rocketman and, in an all-Ireland line-up, the overnight leader Ian Cassells finished third on Rosconnell Alto having clocked up just too many time penalties.

Josh Williamson, 15, led the Equine Warehouse CCI2*-S for Ponies and clinched it with just one rail down on Ardeo Fireman. Ben Connors was second with a clear on Cornafest Fred and Tom Nestor dropped one place to third with a rail down on Tullaree Ruby Tuesday.

The Noel C. Duggan Engineering CCI2*-S saw Emma Egan record the first FEI win of her career with Ballytoher Sabrina after recording one of just three clear cross country rounds inside the optimum time. The leader after the first two phases, Alison Holden (Lates Eddie) dropped down the order with a steady cross-country round for 15.6 time penalties.

Based just twenty minutes from the Green Glens Arena, Sian Coleman took the honours in the inaugural CCI1* Intro class, sponsored by Carr & Day & Martin with Kilroe Frolic, and the prestigious Eventing Ireland CCI2*-S for young horses resulted in a deserved victory for US visitor Cornelia Dorr with DHI Qyaracolle Z.

‘It’s been a great weekend of sport and we’re thrilled so many leading international riders came to Ireland,’ said Millstreet Director Thomas Duggan. ‘Let’s hope we see some of them in the medals at the world championships and perhaps some of the young horses we’ve seen going brilliantly will be medallists of the future.’

The Duggan family have long been steeped in the Irish equestrian world, producing top-class competition horses and hosting international competitions. They are currently providing accommodation to some 300 Ukrainian refugees.