Renwick and Graham Triumph in Ruby and Boomerang

Millstreet is winding down after a packed and busy day with nearly 1500 entries received. The Millstreet Ruby 5 year old qualifier started proceedings off this morning with Great Britian’s Laura Renwick coming out on top with her own 5 year old MHS San Francisco when setting a scorching pace of 35.73 seconds. Renwick who has flown in to Millstreet from a hectic show jumping schedule which has seen her take a number of major classes recently including the Dinard 5* Derby and also a successful Global Champions tour last week in Valkensward Holland. Mikey Pender was hot on her heels with the impressive Drumin Megan in 36.12 seconds. Ireland dominated proceedings with Gerard Clarke and Christian Coyle finishing in third and fourth places respectively.

Over one hundred starters competed in the world famous Boomerang Qualifier with Donegal’s Kenneth Graham fighting it out for first place on his mother Geraldine’s Bier Bua in a time of 34.52. In equal second place was Peter Smyth on Chs Krooze and Jordan Coyle on Harakiri Z who both stopped the clock at an identical time of 35.58. Smyth who recently won the Dublin Horse Show 6 year old Cruising National Championship on the above named horse will be certainly one to watch in the Final.

Outside the Main International Arena, all other arenas were a hive of activity with real time results being published for all competitions on www.millstreet.horse. Live streaming of all main competition’s during the week will also appear on the website. 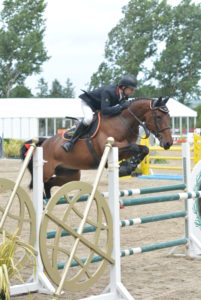